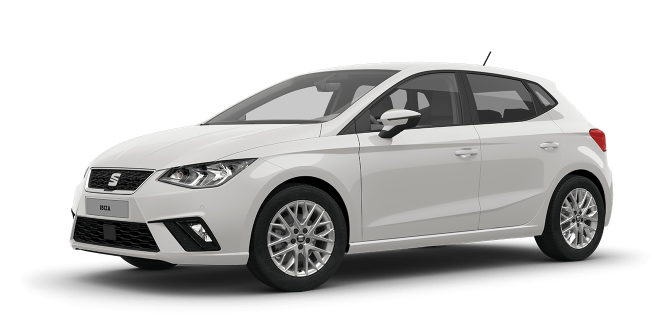 The Seat Ibiza was the first independently produced model of the Spanish auto maker. A collaboration with Porsche in the engine designe allowed the famous "System Porsche" label. It was presented in 1984, the same year Michael Jackson triumphed with his hit Thriller. New versions of the the Ibiza appeared in 1993, 2002, 2008, and this fifth generation dates from 2017. With more than 5 million units, it can be proud of being the best-selling car in Spain ever.

This fifth generation of the Seat Ibiza only has the 5-door body, with which it rivals models like the Renault Clio, the Peugeot 208, the Mazda 2 and the Ford Fiesta. Within the Seat product range it is between the Mii and the León. While it does not have any 3-door or estate variants as previous versions, it does have an SUV variant, the Seat Arona.

The Seat Ibiza has a length of 4,059 mm, a width of 1,780 mm and a height of 1,444 mm. Its boot spacve has been enlarged to 355 litres, and is one of the largest in its segment. The Seat Ibiza is the first model mounted on the new MQB A0 platform of the Volkswgen Group, which equips all the models in that segment from Skoda and Volkswagen.

The design is a direct heritage of the Seat León and Seat Ateca, with straight nerves well marked in the body. One of the inside highlights its 8-inch multimedia screen, compatible with Android Auto and Apple Car Play. The chassis is noticeably more rigid than that of its predecessor, and coupled with a suspension with McPherson columns in the front axle and torsion axle in the rear, give it a more typical aplomb of vehicles of a higher segment such as the Seat Leon.

The units that La Manga Rent a Car has available for their customers in the Group C come with a 1.0 MPI petrol engine with 75 H.P., and three in-line cylinders, 95NM of torque and a 5-speed manual gearbox. The mixed consumption announced by the manufacturer is 4.9 liters / 100 km, although different tests of "carefree" driving showed an average consumption (measured by the on-board computer) of 6.1 liters / 100 km, over a distance of about 1500 km.

Get a quote for the rental of a Seat Ibiza with our Quote Calculator.